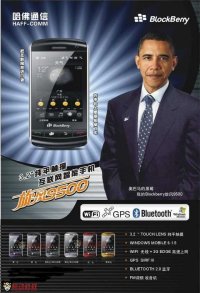 This is a hoot – we all know that Mr. Obama fought his way to keep his BlackBerry by his side even after he became the most powerful man on earth by virtue of his political standing in the world, but this – the Blockberry 9500, a clone of the BlackBerry even gets a standing endorsement from the man in his trademark smile? More than one thing smells fishy here, with the slogan on the phone’s poster, “Obama have Blackberry, I have blockberry” being one of the funniest marketing pitches we’ve come across in a long, long time. Interestingly enough, the Blockberry 9500 will be powered by Windows Mobile 6.1 alongside a 460MHZ proccessor, a 3.2” touchscreen display, Wi-Fi and Bluetooth, WIFI and Bluetooth connectivity, a SiRFStar III GPS navigation chipset as well as support for 3G and EDGE networks.