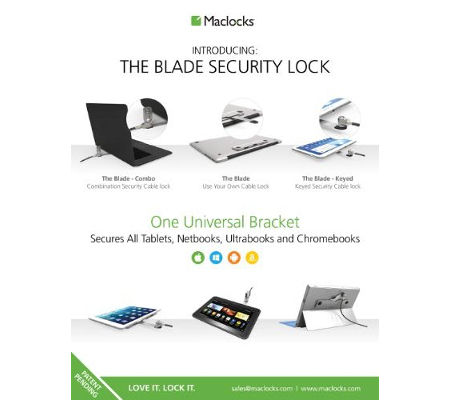 Notebooks (or laptops) as well as tablets are pretty much devices that one is unable to live without in this day and age. After all, these are useful when it comes to being productive while one is on the road, but you know what they say – there is always the risk of the notebook or tablet getting stolen, especially when you are out in a public space or area. After all, the world is not what it used to be, and honesty is starting to run low in social circles. Having that kind of fear playing at the back of one’s mind is not too healthy actually, so what kind of preventative measures can you take? Of course, not purchasing a notebook or tablet in the first place is one of them, but it would not make much sense if either are essential to your livelihood. To not bring them out? No go, too. Why not get a notebook lock? Sounds good, but you might as well go the whole nine yards with The Blade, which happens to be a revolutionary universal laptop and tablet lock.

The Blade will basically enable one to secure just about any notebook, netbook and tablet thanks to an extremely strong retractable locking bracket. This brand new, reinforced metal tab is said to be able to bearing in excess of 150 lb. of force, now how about that? Surely someone who would want to steal your notebook while you are at Starbucks ordering a drink would think twice now.

Not only that, The Blade will come with a minimalistic profile and sleek styling that is not too different from that of a Macbook, which would then hide it from plain sight – camouflaged, so to speak, while complementing the device in use. The industrial adhesive bracket will be attached to nearly any gadget and it incorporates a lock slot to the tip of the retractable blade.

Not only that, The Blade would also make your laptop, Ultrabook or tablet ergonomically comfortable and improve overall airflow and ventilation, making it deliver far more value than originally expected.