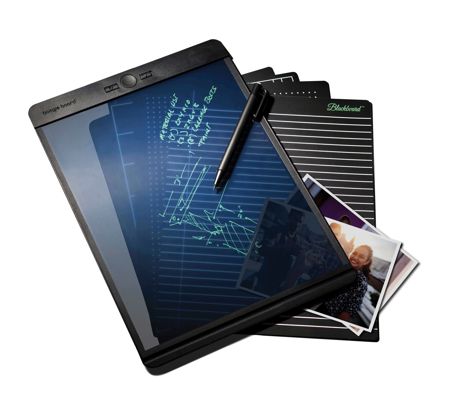 No, this is no ordinary blackboard that the older generation grew up with, where the use of chalk and a duster educated millions of children during their formative years. This is the blackboard of the 21st century, where technology has been fused to an ancient idea in order to deliver the best of both worlds. The folks behind the Boogie Board has come up with the definitive Blackboard, where it has been described as an electronic writing tool that features Liquid Crystal Paper, enabling one to write, edit and erase as though one was using pencil on paper.

Arriving in time for the holiday season later this year, the Blackboard has been touted to be the next evolution when it comes to writing. This revolutionary new electronic writing tool is the first of its kind that boasts of Liquid Crystal Paper, opening up new avenues for one to plan, write and design using one’s hand. In fact, it is so comfortable to use with your hand, it might not even feel new at all despite all of the high end technology infused within.

The Blackboard will write and erase electronically without requiring the use of ink or paper. Not only that, there are also new innovations which have been thrown into the mix, not the least of it being the proprietary Liquid Crystal Paper feature set that results in the most comfortable and natural paper-like writing experience to date. There is no lag or delay to worry about, and neither do you need to turn it on or plug in, which means no charging is required. The button cell battery has been touted to last for a good 5 years before a replacement is required, now how about that? If you want to get your hands on a 8.5″ x 11″ Letter-sized, semi-transparent writing surface, then the $44.99 Blackboard is right up your alley.