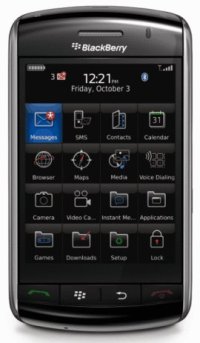 BlackBerry aims to take the world by storm with its, er, Storm, the latest handset from RIM. Touted to be the first “clickable” touch screen smartphone in the world, the Storm will be made available via Verizon Wireless and Vodafone sometime this fall, with the former catering to customers residing in US while the latter will service customers across the pond, in India, Australia and New Zealand. Just what is this storm in a teacup (pun intended) all about, and more importantly – will it ever rise up and overcome the shadow of the iPhone? After all, basically everyone and their dog know about the iPhone prior to its release due to the hype generated, but no matter how good the Storm is, not many people on Main Street are aware of its impending release.

Just like many other self-respecting smartphones these days, the BlackBerry Storm smartphone features an innovative touch screen which is able to depress slightly whenever you apply some pressure on it with your finger, letting you feel as though you were pressing an actual button, resulting in a “click”. This provides the user with a positive confirmation of their selection, and is touted to enhance touch interface dramatically as well as a highly-intuitive typing experience. I guess this is much better than haptic feedback that does nothing but buzz each time you make a selection.

The BlackBerry Storm works as good as it looks, being a high end 3G handset with global connectivity. Verizon Wireless’ BlackBerry Storm 9530 will feature 3G EV-DO Rev. A/CDMA technology, (2100Mhz) UMTS/HSPA and quad-band EDGE/GPRS/GSM connectivity while Vodafone’s BlackBerry Storm 9500 supports (2100Mhz) UMTS/HSPA and quad-band EDGE/GPRS/GSM networks. Inside you will find a full HTML browser, email support, a 3.2 megapixel camera, integrated GPS, 1GB of internal memory, a microSDHC memory card slot, stereo Bluetooth connectivity and a 3.25″ display. No word on pricing at this point in time, although that situation will change in a few weeks’ time.