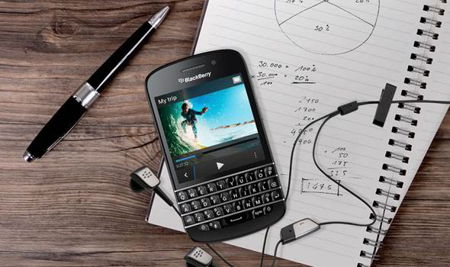 When we talk about BlackBerry devices, what comes across your mind first? Surely the initial image that has been “burned” permanently into our collective consciousness would be that of a small display device that has a QWERTY keyboard, where it has been the industry standard for a mobile device keyboard for years. Well, BlackBerry might have fallen on hard times recently, but this does not mean that they are all out of ideas. No sir, it seems that the new BlackBerry Q20 flagship smartphone will come with the familiar and classic ‘Menu’, ‘Back’, ‘Send’ and ‘End’ buttons alongside an integrated trackpad, so that one will be able to enjoy fast and efficient navigation with but a single hand.

QWERTY loving customers would definitely welcome the one-handed use capability of the BlackBerry Q20, that’s for sure. Among the key features of the new and upcoming BlackBerry Q20 smartphone would include BlackBerry’s patented QWERTY keyboard design complete with frets and sculpted keys which will hopefully, be able to deliver the very best typing experience on a mobile device. I suppose there is a certain level of “unlearning” that needs to be done if one is already so used to touch typing on a virtual keyboard, or using software such as Swype for an intelligent virtual keyboard.

Apart from that, the email service will also include features such as BlackBerry Hub, where one is able to access the entire slew of messages in one place, and enterprise connectivity with BES10. Other hardware specifications of the upcoming BlackBerry Q20 smartphone include a generous 3.5” touchscreen display, which is the largest display to date on a QWERTY BlackBerry smartphone and a large battery. It will arrive in the second half of this year, with pricing details yet to be revealed. What you see above is the BlackBerry Q10 for reference’s sake.

1 thought on “BlackBerry Q20 smartphone arriving in due time”