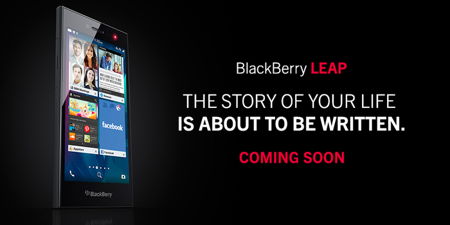 BlackBerry might not be doing too well in the smartphone arena these days, what with some rather mediocre releases in recent memory, but this does not mean that the company is about to throw in the towel and call it a day! Far from it, as we have just witnessed how the Canada-based organization has just made an announcement at this year’s Mobile World Congress (MWC) on the BlackBerry Leap.

This spanking new all-touch device has been specially developed for those who are just starting to make their way around the corporate world, and intend to go full speed ahead where productivity is concerned, in addition to communicating well without compromising on security. You can be sure that the modern design is bound to attract a fair number of curious folk, and since people are always interested in what kind of hardware specifications does a smartphone come with these days, we will get to that right away.

The BlackBerry Leap boasts of a brilliant 5” High Definition display at 294 pixels per inch pixel density, accompanied by an 8MP camera at the back that is full well capable of performing Full HD video recording, a front-facing 2MP camera, 2GB RAM 16GB of internal memory which can be further expanded by another 128GB via a microSD memory card slot, and a 25-hour battery life. All of it will chug along to a 1.5GHz Qualcomm MSM8960 processor.

Connectivity options for the BlackBerry Leap will include Wi-Fi, Bluetooth 4.0 and LTE. You will find that this smartphone will run on the latest BlackBerry OS 10.3.1, where it will arrive with BlackBerry Hub and BlackBerry Assistant right out of the box to help you get started from the get go. There is no word on pricing or availability as at press time, but it ought to be out soon.