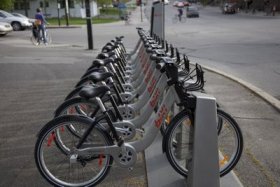 I have a bike, but right now it is out of commission. At this present time, I would be a good customer for Bixi, a bicycle sharing program.

It works by going to one of the bike stations that you see in the picture here, and borrowing one of the bikes. All a user needs is a credit card, and then the user can ride around freely as they normally would with their own bike. Once the user is done, he or she simply returns it to another bike station.

I am not certain how Bixi keeps track of all of its bikes, but I’m told that the setup is “computer-chip based, solar-powered, and Wi-Fi enabled”.

Montreal is the first North American city to host this program, but I wouldn’t be surprised if it wasn’t the last. I’ve never heard of Bixi before, but it really is a program that is ingenious in its simplicity.

In fact, this bicycle sharing program has to be big in certain regions of Asian countries like China. I’ve seen pictures of Asian bicycle racks that rival parking garages in the Western world. If Bixi doesn’t have presence in places like these, then it really ought to.

But hey, who am I to offer advice to a bike lender? Right now, I am in need of one. Too bad I’m not in Montreal.