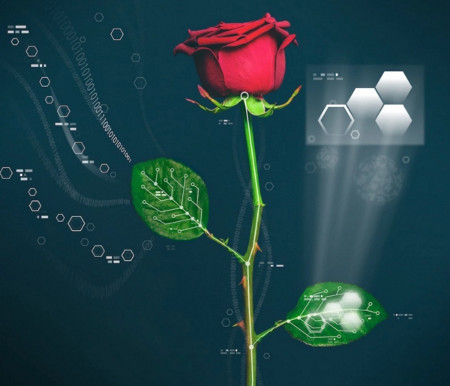 We have heard of the Bionic Man before, but what about bionic plants? Surely there is also a room and place for something like that to happen? Well, we are pleased to announce that scientists have successfully formulated a bionic plant. Yes sir, you read that right – a plant that has its fair share of electronic circuitry. The bionic plant is meant to be a smarter breed of plant which is capable of actively respond to changes in its environment, while informing farmers how it is faring. Heck, the internal circuitry might even pave the way for the plant to boost its growing or bloom on demand.

Right now, this happens to be a proof of concept, although scientists have far grander plans than having a bionic rose that can change its color according to the day of the week, so that you have a fresh looking rose in the vase every single day. No sir, they would like to work on an entire fleet of electronic greens.

Researchers in Sweden are the ones behind these powered flowers, and the roses’ systems have been filled with a synthetic polymer known as PEDOT-S. The polymer was ingested via their stems, thinking that it was a kind of nutrient-bearing water. Within the flower’s xylem, the PEDOT-S will assemble into conductive wires that measure up to 10cm in length.

This will enable researchers to make use of the plant’s own electrolytes in order to form working circuits, and from there, further developments will allow a similar method to create circuitry for just about everything. Pretty neat, don’t you think so? It looks as though roses will no longer be subjected to a single color, but with these bionic flowers, so to speak, you will be able to manipulate the rose into showing off different colors according to your whims and fancy. The thing is, these are still natural flowers as opposed to plastic ones, so they will wilt away.