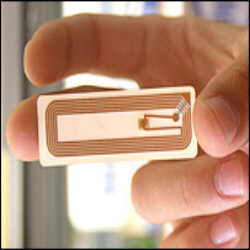 The tiny Island of Bermuda is set to introduce a Radio Frequency Identification (RFID) system for all of the 47,000 moving vehicles on the entire island in an effort to control the way that the residents are using their vehicles, or rather mis-using their vehicles, as it appears that they have a problem in collecting fines etc, it is estimated that over two million US dollars worth of fines are not being paid every year, which for a small place is quite significant amount of cash that could be used on other services etc.

The plan has been given the go ahead and will be implemented as soon as possible, it will involve each and every vehicle being tagged with the RFID device which will have its own unique number and is logged into the Islands central database, as the vehicle is being driven around the RFID can be read by stationary and mobile readers, effectively each and every vehicle can be tracked all the time, wherever it goes.

The system will only identify vehicles and not the drivers, but the system is set up to issue tickets for that vehicle if and when the situation arises. Basically what it sounds like, is the whole Island is going to be covered with readers in fixed locations, as well as mobile units, these will automatically send out tickets to the owners of the vehicles should they commit any traffic offense.

Clearly it is not going to be a place for fly/drive vacation unless you are an extremely careful driver and even if you are, it would be prudent to study the traffic laws prior to getting behind the wheel, otherwise it may turn out to be a rather more expensive vacation than you originally thought.

Bermuda is only around 21 square miles in size, has a population of around 63,000 and has over 47,000 vehicles, but in proportion the country is said to have one of the highest ratios of traffic per square mile in the world, which is why they have introduced this system, it is estimated that the government expect to recoup over $11 million dollars I the next five years in lost fines alone, that is without all the new fines that will be issued because of the system catching more drivers speeding and breaking other traffic laws.