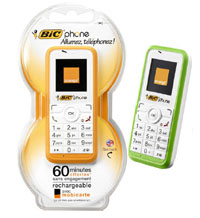 Bic is an awesome gadget company. I’ve been using their quality ball-point pens and even a disposable razor or two for years. I’m not quite sure if I can trust them yet when it comes to anything too technological. I mean, they don’t really have a reputation as a tech company. But luckily, with this dip in the mobile market pie, Bic has a little help from their friends.

Bic has teamed up with Orange France to release the first ever Bic Phone, a cell which is sold with a pre-charged battery and made to be thrown away after a chunk of usage. The Bic Phone comes with a SIM card already set-up and roaring to go, with activation being the only needed step. Each Bic Phone will also offer 60 minutes of free talk time. But you can always add more minutes if you’re so inclined.

Don’t be turned away so easy. We don’t want you to worry that Bic hasn’t had any help along the way with hardware. As it turns out, Alcatel manufacturers the phones themselves, with the telephone number included in the packaging. So while it might be an extremely low-end phone (it’s made for strictly calls and texting only), at least Bic has a known hardware co-dependent backing them up.

The Bic Phone will be available in France starting August 7. There will be two color choices: Citrus Orange and Lime Green. The phone itself will cost €49 (£39/$80). It’ll be interesting to see how the disposable phone idea works, especially from a name not associated with the mobile industry at all up until now.