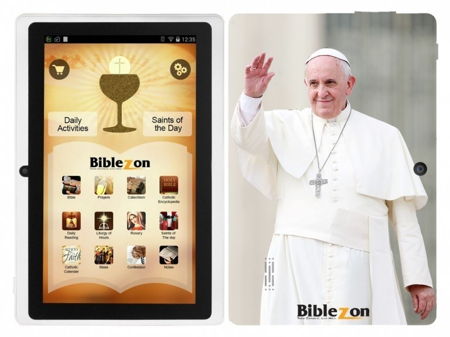 When you are a revered figurehead and leader like the Pope, you can be sure that you will have your fair share of adoring masses and fans, never mind the fact that you are a spiritual leader to more than a billion people on the planet as well. Well, this means the kind of stuff that you use need not be of the ordinary mold, and this would include the tablet. Forget the already expensive iPad Pro, how about a special tablet just for the Pope?

This was made possible when Ryan Conklin, friend of Biblezon CEO and Founder Mosongo Osong, made a pilgrimage to Rome. He was newly (and blissfully) married, making their way to the Vatican for a Papal Wedding Blessing. Conklin did not go there empty-handed, however, as he and his bride carried an extremely special package with them, with the intention of making a personal delivery to Pope Francis.

The special item in question? An extremely special and unique Biblezon Catholic Tablet, which is truly the only one of its kind in the world. Not only that, it has been specially crafted in order to reflect the significance of such a moment. In other words, this unique device is a special Biblezon Catholic Tablet which was manufactured just for Pope Francis himself, and no other.

This special Biblezon tablet has a shade of white to reflect the purity of the church, while designers threw in a photo of Pope Francis to the back as well as to the case. Underneath the hood, however, would be the operating system in addition to available apps which will be similar in terms of accessibility to all current end users of the Biblezon Catholic Tablet.

Apart from that, the box that housed this special tablet contained a message from Biblezon Founder Mosongo Osong, where the letter saw Mosongo thank Pope Francis for what he was doing for the Church and the world, particularly his message of love and mercy. This is one tablet that you cannot purchase anywhere, that is for sure!