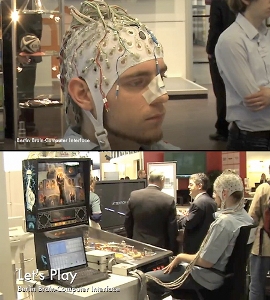 This is an odd way to play pinball, don’t you think? Shouldn’t this man be standing in front of the machine? And what’s with that wired bathing cap?

This is probably what I would have said if I was at CeBIT 2010 and passed by this display of the Berlin Brain-Computer Interface. As it turns out, this man is playing this game of pinball with his brain. I’m not saying that he’s really getting his head into the game, but his head is playing the game.

You can watch a video of the setup of this person in action after the jump. I really have no idea if this man is just some visitor to CeBIT or someone who works for the company, but you can watch him as they set him up to play pinball on this Addams Family themed pinball machine. Yeah, I would have chosen a different theme, but the multiple flippers does make it interesting.

Unfortunately, there isn’t really an explanation about how this works on the video, which has absolutely no voiceover narration. I have no idea if you have to think: “Left flipper, right flipper” to get it to work. I notice that this user has to manually start the ball rolling, and I’m guessing that mentally tilting is not an option.

I suppose we are probably looking at an age where arcade games make a comeback, and the players are jacked into them mentally. That, or come up with a console version of this mental controls. I suppose that this could be the next version of Project Natal.