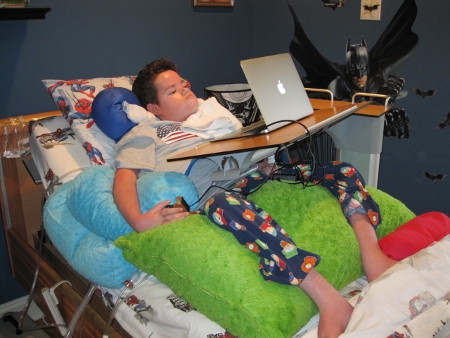 I would say that many of us become jaded in life, taking things for granted instead with what we have, as we start to look around and complain about what we do not have. Some folks do not murmur or mutter, they just go ahead with life and make sure that they work hard and smart for what they eventually want to achieve. For folks who own at least one video game console, have you given a thought to how some other people want to play the games that you do, but simply cannot because of their physical limitations? A teacher from New Jersey sent in a request to modder extraordinary, Ben Heck, to develop an accessible controller for a student living with Pompe disease, which is a neuromuscular disorder that causes muscle weakness.
This condition basically means 13-year-old Patrick Crowley is unable to play with the standard video game console controllers simply because he lacks the muscle power to do so, but thanks to the teacher’s request and Ben Heck’s amazing hardware wizardry, he managed to conjure up an accessible controller that enables Patrick to play video games which require complex button sequences, where among the titles would include X-Men Origins: Wolverine.

Ben mentioned, “When I first decided to take on this request from a show fan, I didn’t know the Crowley family’s story and the incredible journey they’ve led to help their children and others living with Pompe disease. This was an interesting project to work on from a technical perspective and I am extremely humbled by the chance to create a tool that helps Patrick enjoy one of his favorite pastimes.”
In order to conjure up this bit of Christmas magic, Ben developed a breakout box that sports eight input switches which will function as the interpretation layer between the Xbox 360 controller and simplified controls. Ben further explained on how signals will travel from the Xbox controller button to the game itself, and also showed viewers on his show the relevant steps required to make this accessible controller. Interesting stuff, and I am quite sure that Patrick will be having a really fun Christmas, thanks to the heart of a teacher and the man behind the modifications, Ben Heck. Isn’t it heart warming to hear of stories like these during the holiday season? There is hope in humanity yet.

1 thought on “Ben Heck comes up with an accessible controller”