I should rephrase that – you can share what you’re listening to with five friends. 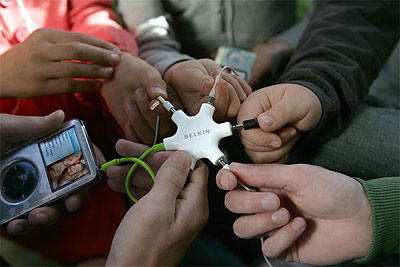 The Belkin RockStar is a handy star-shaped minijack hub to which multiple headphones can be connected, allowing one music player to send music to up to five pairs of headphones. The RockStar offers six ports—one input and five outputs—so you can split one signal to many sources. It’s also cool because the five outputs can be toggled to input as well, so you can mix more than one signal together and output to one source. Could be handy for some awesome mixing.

The idea of mixing different sources together could be pretty cool, but for the most part, it’ll be 14 year-olds playing one loud punk band over another in a cacophony of bad taste. And they’ll think they’re cool while doing it (which they won’t). Pick up one of your own for $20 in March from Belkin’s website – or anyplace that sells Belkin products.