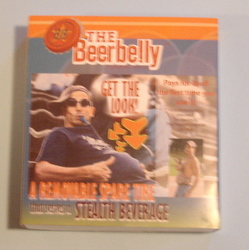 We reported on the cool beer belly product earlier in the year. Thanks to the good guys who make the beer belly we can now follow up on that report with an unbiased (though at times maybe intoxicated) review.

As I have a natural beer belly I enlisted my mate Russell (Software engineer by day, beer belly model by night) to do the photo shoot and product testing (Russell will do just about anything for free Stella Artois). 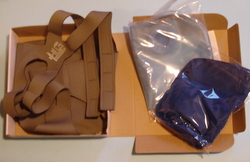 Upon opening the beer belly we found a well made harness, gel pack and what looked like a colostomy bag (though this was in fact the beer bag). 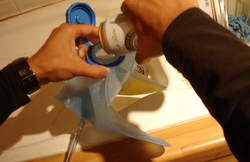 Filling the beer belly was easy, it has a large screw on top so you can safely pour a can in without fear of beer spillage (which is a cardinal sin). It holds 80oz which for us equated to 4 large cans of Stella (Russell’s modeling fee).

What happened next I still don’t really understand but Russell reckoned modeling the harness would be better with out a top on (or was that my girlfriends idea).

The belly was actually pretty comfy to wear even when full and the more you drink the thinner you look. Putting the beer belly on was a bit of a two man job, though I’m sure the dedicated drinker can manage this on their own with a bit of practice. When you get towards the bottom of the bag you do have to jiggle it around a bit to get the final few gulps out, so expect a few strange looks when you start playing with your belly.

The before and after pictures show how much more manly Russell looks when he’s wearing a full beer belly, though he does have his limits as I could not persuade him to wear it to the pub.

All in all the beer belly is a pretty cool product and does exactly what it’s designed to. The one improvement we could think of was to have a longer drinking tube so that you can run it up your sleeve instead of having the nozzle sticking out of your collar. You can buy online and get further information over at the official beer belly site.

Thanks again to Russell for being the first CG model, I have promised not to show this to anybody at the office, so if you’re reading this, work at RT and are not Russell please say sorry to him :).