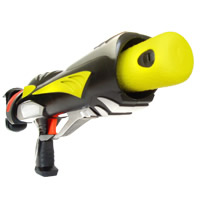 I’m pleased, or maybe a little embarrassed, to admit that that I’ve tried out this gadget, and it really is a lot of fun! The Bazooka Foam Gun is a stronger and more powerful version of foam shooting guns which is a whole lot of fun and even hurts a little bit unlike its pathetic alternatives!

A couple of weeks ago my friends and I were bored, so of course we went to hang out in the toys department of Walmart like any other bored person would do, (right?). One of my friends had some money so we were bugging him to buy us some toy guns and we convinced him to get us each a cool toy gun. We got 2 cap guns, a Nerf dart gun and the Bazooka Foam Gun.

We took it out into the parking lot and after sawing through the packing with my keys we had the bazooka out. There were foam rockets and the bazooka itself so we put one in and starting pumping it up. On the back of it there is a handle which you pull out to pump the gun. About 8 pumps will fill it all the way, then you can just pull the trigger to shoot.

The package advertised 60 feet, however we were skeptical since most foam guns only go 10 or 15 feet. When we shot it though, it went incredibly far and fast! We didn’t actually measure any distances, however it was at least 50 feet.

As soon as we realized the awesome power of this gun we of course started shooting it at each other which actually hurts! This is a much more powerful alternative than those wimpy foam dart guns and can be used for some serious wars! We eventually had to end up controlling my trigger-happy friend with some silly string that we also bought; Walmart can be so fun :).

It’s a lot of fun and requires no batteries as it uses only air compression to launch the rockets. They even make a cool whistling sound in-flight so you get that cool bomb-dropping effect. The rockets are actually quite hard and shoot very fast so you probably shouldn’t be launching them at people’s heads, trust me, we’ve tried ;).

These cool bazookas are available for just £12.95 from, of course, Boys Stuff.