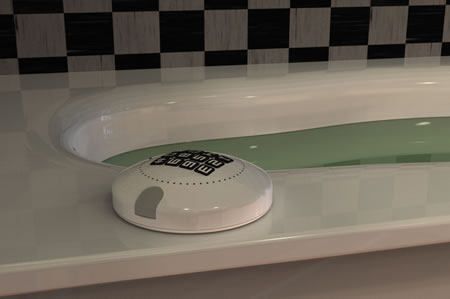 Update 2019: There is no need for a special showerphone anymore. Today there are many different shower speakers you can connect to your smartphone allowing you to make calls or even use Alexa and Google Voice. A good budget speaker costs less than $40, so make sure to check them out.

There are several times I make a point to disconnect from the world, which means no laptop, no phone, no nothing.  Just get away, even if it’s just for a little while, so that I can feel somewhat recharged.  It’s one of those things that I’ve found is necessary for me to function.  However, there are those that are the polar opposite of me.  They absolutely need to stay connected to the world, otherwise everything seems to fall apart.  Well for those that need that connection, there is now this bath tub friendly phone that will allow for you to keep on chatting even while you’re soaking in the tub.

It has speakerphone so there’s no worries about getting a handset wet while you’re in the tub.  This Bathphone, were it to ever be turned into a real phone, I would hope would be waterproof.  However, being a concept design, it’s a little skimpy on the details.  One thing’s for sure, it would be elderly-friendly with the size of those numbers.  It’d probably also allow those that have to take off their glasses while in the shower to still be able to read the numbers.