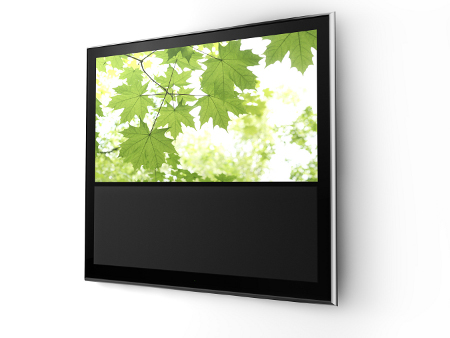 Bang & Olufsen has announced its latest BeoVision 10-40″ TV to the masses who are living in North America, making it the third video product to be launched by the company this fiscal year, where it is more than capable of presenting a full HD picture thanks to its spanking new LED technology. As with many other Bang & Olufsen electronic appliances that have rolled out in the past, the BeoVision 10-40″ is no different from the rest when it comes to resembling a piece of artwork on the wall, although it is more than capable of revealing an impressive image as well as deliver stunning sound performance despite its relatively modest size.

For those who are interested to check out the BeoVision 10-40″, you will be interested to know that it will be traveling on an U.S. tour for five exclusive press and customer events in Chicago, New York, Los Angeles, Washington D.C., and San Francisco. These events will obviously center on an art theme in order to demonstrate Bang & Olufsen’s continued commitment to design, all the while showcasing the company’s latest product launches for the rest of the 09/10 fiscal year. Chicago will have the honor of kicking off the event, where it will happen at the River East Art Center on March 18th, followed by New York at the Chelsea Art Museum on March 25th, and Los Angeles at the Kopeikin Gallery on April 8th. Apart from that, consecutive events will include San Francisco at Hosfelt Gallery and Washington D.C. at Addison Ripley Fine Art on April 15th. In order to commemorate with the class of the events, they will feature Dom Pérignon as the official champagne sponsor where guests who attend the evening events have a chance to win a bottle of Dom Perignon Vintage 2000 champagne.

Interested? The BeoVision 10 will make its way across all North American showroom locations by the time summer of this year rolls around. You will be able to choose from black, white, silver, dark grey, blue and orange colors for its front grill cover to suit the decor in your place, with prices starting from $6,248 upwards. Definitely not something that you can categorize as an impulse purchase, and you will probably need the approval of your other half before the money is released. If you prefer to fork out $7,675 for this puppy, it will include the wall bracket, Beo4 remote, and upgraded anti-reflective screen with other upgrades being available upon customer request. There will be a 46″ model rolling out later this year as well, although we don’t have word on its release date and pricing just yet.