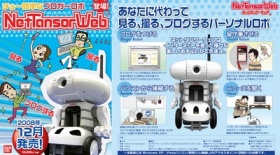 If you’ve seen the Disney/PIXAR movie WALL-E last summer, then the Bandai NetTansorWeb robot will probably look strangely familiar. Robot Japan 2008 was the stage for Bandai as they presented the NetTansorWeb, which unveiled a new robotic friend with some interesting features.

The NetTansorWeb is designed with surveillance cameras, and can move around your house automatically while you are gone, checking for intruders. It has sensors that will avoid obstacles, which I can only assume stairs. You can also control the robot via Wi-Fi to check things that the autopilot is probably missing. I have no idea if you can operate the robot arms, but they look like they are just there for show. I hope that I am wrong.

Another feature of the NetTansorWeb is that it will send reports of its surveillance, and it will even blog its progress. That’s right, it will blog. It may not update your personal blog for you, but it can monitor the comments section and respond to requests for image re-uploads.

I’ve heard that the battery life is low at only two and a half hours. Is there any way it could recharge automatically, or by remote control? I guess we’ll see in December, when the NetTansorWeb is slated to come out in Japan for a price of about $500.