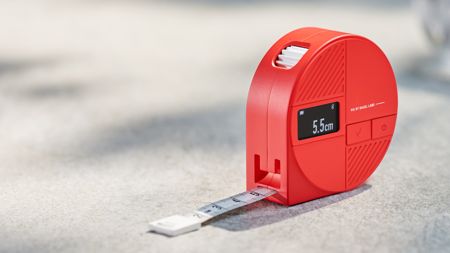 It does seem as though many things need to get smart these days. The “smart” revolution kicked off with the Personal Digital Assistant (PDA), where it proved to be revolutionary when it came to taking down notes digitally for future reference. Once the PDA merged its functionality with that of a phone, there was no looking back. The smartphone paved the way for many other smart technologies, including smartwatches and smart homes. Bagel Labs decided to work on its second internet-connected smart measuring tape, calling it the PIE.

The PIE from Bagel Labs intends to differentiate itself from a wide range of fitness trackers and smart scales that are already in the market, as the PIE smart tape measure will focus instead on helping users easily capture their body sizes for fitness and health purposes. With the PIE, users are allowed to simply wrap its flexible fiberglass tape around any body part, and it will get to work right away. This particular tape tip will be accompanied by a slit opening which can be securely locked to the PIE’s hook, resulting in an effortless measuring experience.

In addition, the PIE will also feature a fastening gear in which the user is able to turn to adjust the tape to a snug fit. Bagel Labs’ patented sensor technology is capable of accurately calculating length, while the measurement appears on the digital display in an instant. It will work with complementary Android and iOS apps, letting users save and analyze their body measurements on their smartphones in which they can refer to in a jiffy later on. All measurements are saved via Bluetooth to the app with a single button click, and there is also the option to set a goal for each body part and track progress.

For those who would like to sink their teeth into the PIE smart tape measure, you will be able to do so for the Kickstarter project at $39 for early birds, so go ahead and place your pre-orders today in order to nab a steal.