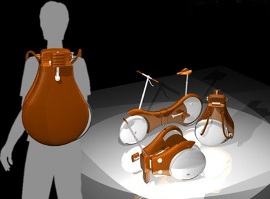 Some of our readers might be avid cyclists, but live in the big city. If you live in a high rise, you might have a terrible problem when you have to bring the bike into the elevator. Then there is that awkward moment as the elevator car stops mid-way gets way too crowded. Bikes take up a lot of space in apartments as well as elevators, and it would be nice if bikes could somehow shrink when not needed.

The Backpack Bicycle solves this problem by folding up the bike into a compact transport for your back. The designer, Chang Ting Jen, also reduced the weight of the bike by using plastics instead of metal.

This easily transportable Backpack Bike weighs in at about 5.5 kg, and can also be switched around to become a hand-cart. I don’t know about you, but that reminds me of these Transformers toys called triple-changers: robots that could turn into not one, but two vehicles.

So far the design is a concept now. However, I believe the designer had the public transportation system in mind when he designed this vehicle. The Backpack Bike could easily be taken with you on a subway or bus, and would be worth mass-producing for.