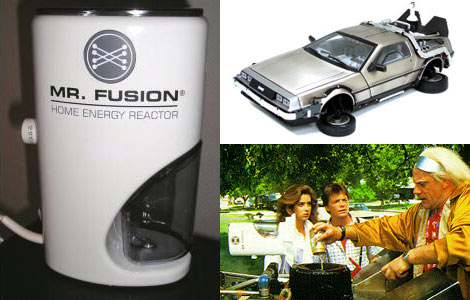 Do you remember that scene from the movie Back to the Future II, on which Doc Brown comes back on his DeLorean time machine equipped with Mr. Fusion, a reactor that turns garbage into energy? Now reality is copying fiction once again, with a brand new Brazilian project developed by the Institute of Technological Research (IPT) and the Technological Institute of Aeronautics (ITA).

The goal of this project is to inject gas heated by electrical discharges at an ultra high temperature in a turbine to decompose the garbage. Besides creating an alternate source of energy, the objective is also to make it 100% ecological, turning all of the recycled trash that doesn’t turn to smoke into asphalt to be used on the pavement of streets, eliminating the serious problem of garbage disposal.

“If everything goes according to plan, this process will allow the garbage to have an ecological correct disposal, preventing it from ending up in a landfill, and still generate energy for other uses”, explains a researcher.

The use of plasma gas on similar applications has also being developed at Japan and Germany. According to an IPT researcher, the ideal use of this process involves integration with a garbage collector and selection of recyclable residues.

As for now, the researches have achieved the completion of the plasma reactor, and are looking for sponsors to buy the turbine and complete the project until 2008.

Via IDG Now (in Portuguese).