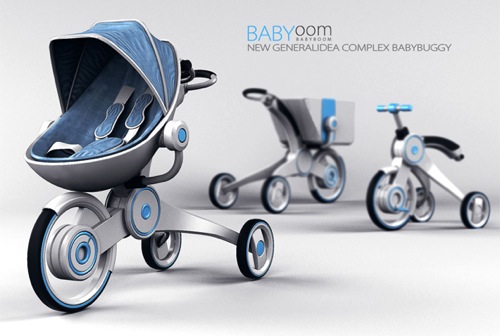 Buying items for babies is not only expensive, but in some ways feels absolutely pointless.  It’s great for the baby while it’s an infant, but they only stay that small for a very brief amount of time.  Then you’re stuck shopping for toddler accessories and after that it’s the preschool stage.  It would be far nicer if that small fortune you spent in the beginning actually lasted a little while.  Thankfully, some companies have started to create items that will adapt with the changes your child goes through.  One adaptable design is the Babyoom.

The babybuggy will work up until the child turns three and doubles as a car seat.  Then once they’re a bit too big for the buggy it transforms into a tricycle, which the child will be able to enjoy for several years.  After they’ve grown tired of that it turns into a shopping cart.  I know, it’s a slightly strange thing for it to turn into in the end.  In my part of the world stores have plenty of carts available on site, but I haven’t been everywhere, so maybe there’s an area where people bring their own shopping carts.  That or it could just be you want a shopping cart that is actually sanitary.