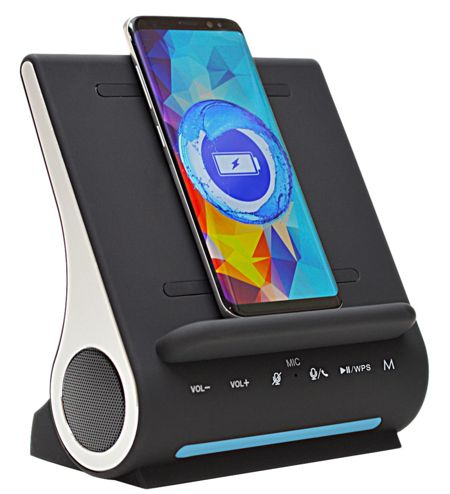 Azpen Innovation has come up with its fair share of creative solutions that boast of cutting-edge technology, design, and features in the past, and they continue this trend through the introduction of not one, but two Alexa-enabled models to its award-winning range of DockAll wireless docking stations/chargers that will debut at the upcoming CES 2018. This pair of new models will both share the following feature, being a dual-channel 4.0 Bluetooth Hi-Fi speaker system, and will be known as the DockAll Pro Amazon Alexa Qi Wireless Charger (D310) and the DockAll Lightning Pro Amazon Alexa MFi Adapter Charger (D320).

With the modern day road warrior and office drone carrying a fair number of devices per person, it makes perfect sense if there was some particular accessory that will allow users to juice up multiple devices simultaneously. The difficult question to answer is, how can one turn an award-winning product into something better? The answer lies in throwing in voice-activated assistance. This is what has happened to the D310 and D320.

With the introduction of Alexa into the above two docks, these new DockAll units are able to go way beyond providing a means to charge multiple devices simultaneously. It also enhances their native capabilities to include playing back music, controlling a smart home, providing news as well as weather, and other things. Imagine saying, “Alexa, charge my phone, and while you’re at it, play some classic rock ‘n roll.” and it gets down to business, no questions asked.

The universal DockAll Pro Amazon Alexa Qi Wireless Charger (D310) plays nice with devices that are up to 13” in height, boasting of integrated 10-watts fast Qi wireless charging technology, Handsets that are not Qi capable will make do with a pair of USB ports on the back, arriving with an asking price of $149.99 a pop.