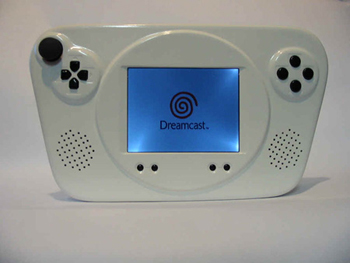 When you ask gamers what their favorite console of all-time is, chances are that you’ll hear the name Dreamcast pop up with certain regularity. What’s facinating is that despite all it’s awesome features and extreme popularity with gamers, it was considered something of a failure to Sega, and marked their exit from the console gaming market. Well, some guy with a a lot of time on his hands decided that he loved his Dreamcast too much to leave it at home all day, so he turned it into a portable console.

This is the sort of thing that I would expect from Ben Heck, (If you don’t know who he is, you should really Google him, he does awesome mods) however it is not. I don’t actually know who made it, but it’s incredible. The case is vacuum-formed (which is why it looks so good) and features a small LCD screen and a pair of speakers. The discs go in the back, though there isn’t a cover which is almost a bit scary. As for batteries, it uses a pair of 7.2V 3Ah batteries that are normally found inside R/C cars. This is seriously one of the coolest mods I’ve seen in a while.