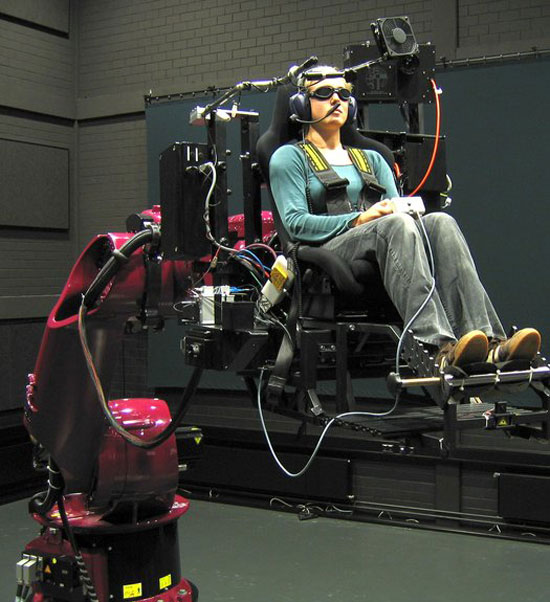 My source called this photo the “image of the day”, and I have to agree. You might wonder this is. Just to let you know, it has nothing to do with Neo and his friends aboard the Nebuchadnezzar getting plugged into the Matrix.

It is about creating a virtual simulation. Believe it or not, the purple section that you see in the photo is part of a gigantic robotic arm. I don’t know what this mammoth robot arm was originally used for, but it is now a vital part of a racing simulator. You can watch the video after the jump if you don’t believe me.

I guess what you don’t see here in the picture is the video screen that is certainly in front of the user in the video. You will notice how the arm will lean back as the speed increases, and it shifts back and forth with the turns. I’m pretty certain that this is how Disneyland’s Star Tours works.

This robot arm/racing simulator is part of a study by Paolo Robuffo Giordano at Germany’s Max Planck Institute for Biological Cybernetics, researching the way our bodies experience motion. I don’t think it is made for home use like the SimCraft, but I suppose if I had a giant robot arm, a TV screen, a racing game, then this is definitely the best combination that I could think of.