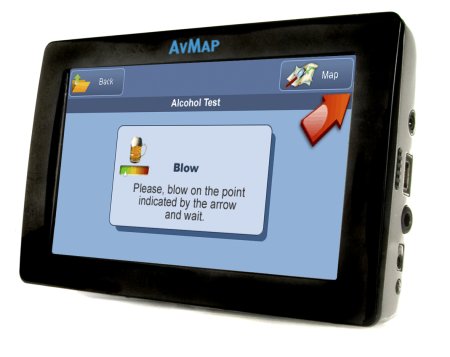 AvMap has just made the announcement that it will release the Geosat 6 Drive Safe satellite navigation system that was originally developed for the Peugeot 107 Sweet Years as a stand-alone navigator for the masses. Think about it – you don’t have to worry about not having to fork out a huge bunch of cash just to get a free car with this GPS navigation system (I suppose that depends on how one looks at the situation, of course). More on the AvMap Geosat 6 Drive Safe system right after the jump.

The Geosat 6 Drive Safe is a compact 133 x 83 x 21 mm navigator that offers users a dazzling array of features including a 4.8″ touch screen – the largest 16:9 widescreen on the market, Bluetooth for hands-free operation and even a built-in breathalyzer that helps drivers ascertain whether it is safe for them to drive or if they are above the alcohol limit. Other safety features include a text-to-speech function that announces street names and turns so users can keep their eyes on the road, a stop planner function that enables users to plan stops for lunch or refuelling in their journey, a trip computer feature that provides an overview of the journey, including average speed, top speed and stop time.

The Geosat 6 Drive Safe uses a LEA-5S GPS receiver module provided by u-blox, the leading Swiss GPS technology provider. The LEA-5S boasts a Time-To-First-Fix of less than one second, enabling drivers to instantly know which direction they need to take as soon as they switch on the navigator. Powered by the 50-channel u-blox 5 positioning engine, the LEA-5S brings high navigation accuracy and reliability in a compact, easy to integrate module.

No idea on how much this standalone unit will cost though.