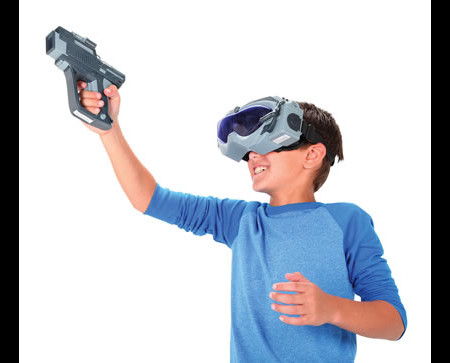 Marvel has certainly outdone itself in the cinematic realm, successfully making comic book heroes on the silver screen a top draw. Of course, the carefully cast actors and actresses in their respective roles also did play a part in the huge box office draw. Well, Marvel certainly are not done yet with all the movies in their pipeline, and while you wait for the next best thing, you might as well line up Christmas presents for your little ones. Why not keep them entertained with the $49.95 Avengers Virtual Reality Battle?

The Avengers Virtual Reality Battle is a head-mounted blaster game which will allow children to do battle with Ultron. Arming an aspiring S.H.I.E.L.D. agent with a powerful blaster, the player can choose from three different levels of difficulty. He or she will then suit up and join the Avengers in order to topple this nefarious villain. Expect the headset to fit snugly around a child’s head thanks to the two adjustable straps. It will project three alternating images (two of Ultron, one of Iron Man) on the inside of the goggles, where you then take aim of the blaster at Ultron. Each successful hit after pulling the trigger will score a point, but if you shoot Iron Man by accident instead, you lose a point. Realistic Avengers sound effects are part of the mix, and so is the score tally on the digital counter. Half a dozen AAA batteries are required to get the Avengers Virtual Reality Battle, er, battle-ready.