We express ourselves in many different ways. Some need an outlet such as art or a physical activity to vent their emotions. Perhaps one of the most widely used methods though, is music. Listening to music is how we show others what we think of the world, how we’re feeling on a particular day, or in a specific moment. Most of the time though, it’s the music that other people have created, but has an element that we can relate to. What if you could create your own music, and didn’t even need an instrument to do so?

Much in the same way that we move to the beat of a song, the AUUG Motion Synth will allow you to create music based on your movements. It’s sort of the reverse of ‘feeling a song’. All you need is an iPhone or iPod Touch, and the Motion Synth will do the rest. There are three components of the Motion Synth you’ll need to make this work (excluding your phone), and it consists of the AUUG grip, app, and cloud.

The AUUG grip gives your phone a place to sit so that you don’t need to hold onto it. The app responds to intuitive natural movements, which means it will lessen the time it takes to start making something that sounds like music to your ears. The cloud will allow you to share presets with other AUUG Synth users, discuss techniques, and see tutorials. As it is motion-based, the sky is quite literally the limit when it comes to what you can create.This will cost you anywhere from $68-78 should you feel like dancing to the beat of your own drum. 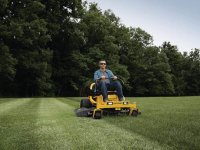 Our favorite zero turn mower is the Husqvarna RedMax RZT54. It’s very comfortable to operate and comes with a 24 horsepower Kawasaki engine which is powerful enough for pretty much every garden size.