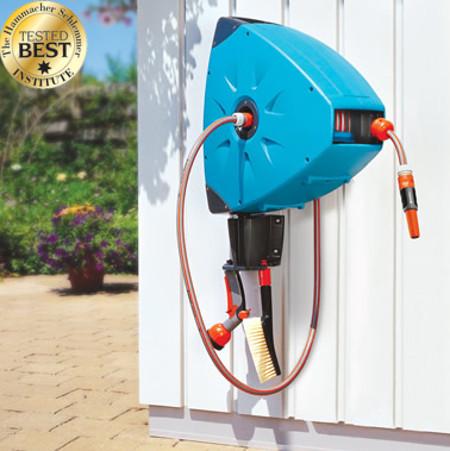 The folks over at Hammacher tend to throw in superlatives whenever they are describing some of the stuff that they sell over there. The thing is, who are the ones carrying the standard and enforcing it? Well, if it is an in-house proclamation, every Tom, Dick and Harry can sell plenty of “sound good” items, but I suppose Hammacher has done their homework before, which is why they have managed to stay in business all this while. The latest device to roll out from them that carries a “The Best” title in the name would be the $229.95 The Best Automatic Hose Reel.

Folks who spend plenty of time in the garden would be able to know just how useful it is to have a hose reel ready, and just how the heck did it pick up the “The Best” rating from the Hammacher Schlemmer Institute? Well, it did so because it was the easiest to retract and most durable, and analysts have already done their bit to retract each model 50 times, making The Best Automatic Hose Reel being the only model that retracted every single time without fail. Kiss goodbye to required multiple tugs, as you can snake the Best model around the garden nonchalantly with its 66′ hose, in addition to its ability to swivel 180° when mounted to a wall and 360° when mounted to a deck surface.