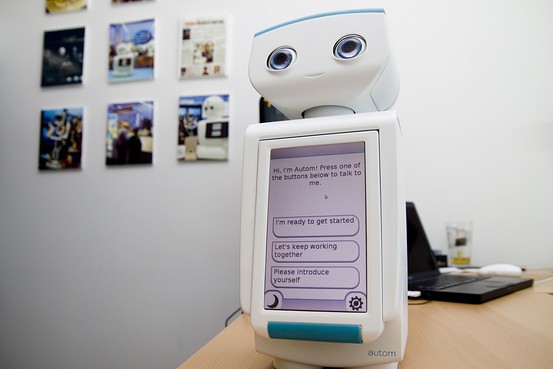 As someone who is trying to lose weight, I have quickly learned how tough a fight it is going to be.

I believe the Autom robot was designed to help out the user with their diet. It is up to the user to enter in the details of their diet, such has their fitness level. Just think of it as a WiiFit, except the white rectangle talks to you.

The Autom has some sort of databank, and then it can carry on some conversations. I can only assume that these conversations are pretty one-sided, and Autom will tell you to “stick to your workout, fattie”. Okay, I added the “fattie” on the end there, but I think you see what is going on here. I have a video of it if you want to see it in action.

This is kind of a spoiler, but the video says that Autom is going to be featured in the film Astro Boy. I seem to recall seeing that film last year, and I didn’t see it.