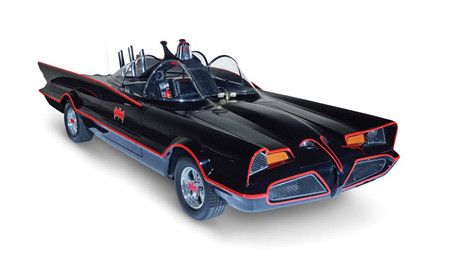 I still cannot believe my eyes that the folks over at Hammacher have managed to get hold of what they have described as “The Authentic 1966 Batmobile”, having slapped a $200,000 price tag on it along the way. In fact, just how authentic is it? Apparently, the entire ride was so accurate in comparison to the original, that it took nearly a year to complete, making this an officially licensed, roadworthy replica of the Batmobile that was originally featured in the iconic 1960s TV show.

Specially built on a custom Lincoln chassis, this is one crime-fighting cruiser that allows the driver to dress up as Batman, but I would strongly suggest you work on your detective skills before driving this puppy around lest the bad guys in your ‘hood figure out that you’re a phony. Underneath the hood of this Batmobile lies a 430-horsepower, 383 Blueprint Crate engine and a Monster TH350 automatic transmission. The vehicle’s cockpit will also pay homage to the TV series by being equipped with a blinking Batphone, switch-operated electric actuators that will open up the hood and trunk, as well as a rotating red beacon so that citizens will be alerted that you are hot in pursuit of fiendish criminals. Will it be able to pick up the chicks? Trade $200,000 for it to find out!