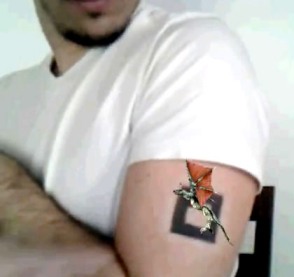 I suppose it was just a matter of time before people starting putting augmented reality tattoos on their flesh, and this Beunos Aries-based software producer has done it through a company known as ThinkAnApp.

These tattoos seem rather basic, as they are just a typical QR code. However, once placed in front of a specially-equipped camera, a design comes forth that the most gifted ink artist could not do. As you can see, this man has a dragon that can literally flap its wings and fly around. I believe that I have a video of this after the jump.

As I recall, don’t people get tattoos like birds on their arm, and make them fly by flexing, or something? Sorry, I’m not really into the whole “tat” scene. I only bring this up because these augmented reality tattoos have the whole tattoo flexing thing beat.

I mean, when Hollywood runs out of ideas fifty years from now, they can remake Memento with tattoos that can show why Leonard Shelby can’t make new memories.