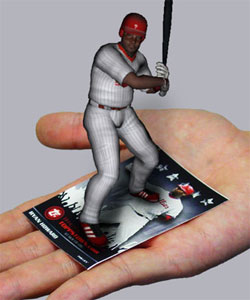 Some of you might remember when I reported on Augmented Reality from Total Immersion. I believe I stated that this blog should stop reporting, because I had found the coolest gadget ever.

It would appear that Total Immersion has found another awesome use for their Augmented Reality technology by partnering with Topps, makers of many trading cards, specifically baseball.

Some of you might remember those holographic cards that have 3D on 2D, but Augmented Reality takes it to the next level. What you need to do is install some software into the computer, and it changes the way your webcam “sees” the card.

Hold the card in your hand before your camera, and the display will show a three-dimensional avatar of the player himself. Moving your hand will cause the avatar to change its angle. Total Immersion has also stated that the avatars will be able to do things like batting, catching, and pitching. I wonder if the cards will get to play against each other, like the Pokemon cards I saw at CES.

The cards will sell for about $2 for a pack of twelve. My source does not say how much the Augmented Reality software costs, nor does it say when these special cards will be available.