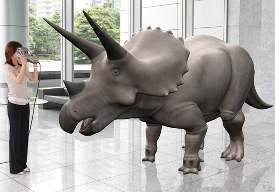 Imagine a museum that is nothing more than a blank room. Not much to see, is it? However, if you put on a pair of virtual reality glasses, a whole new world opens up to you. A world that is full of dinosaurs who roam freely.

This is part of a new exhibit in Chiba, Japan. Visitors have the opportunity to walk with the dinosaurs, as their virtual reality glasses project these creatures of old in three-dimensions right before the viewer. For the record, I think the technical name for this type of entertainment is augmented reality, not virtual reality.

However, it sounds very cool to look around you and see yourself in a Jurassic Park, with all the oohs and aahs and not the running and screaming. I would imagine that there will be lots of people who will try and “touch” the dinosaurs. They will probably look like freaks to those who aren’t wearing the glasses.

Still, I like the potential of this exhibit. I think it should be taken to the next level, and the user should be able to hunt the dinosaurs like Turok. Just don’t step on a butterfly, or you could change history. You’d have to read Ray Bradbury’s “The Sound of Thunder” to get that reference.

Anyway, if you want to go to Chiba to see over 260 dinosaur specimens, be sure to get there from July 18 to August 1st.