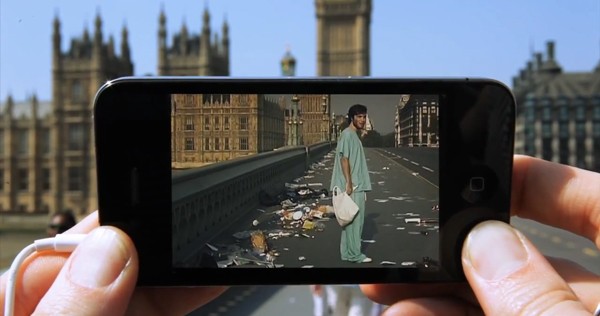 Normally, I don’t report on Apps here, as we could do a blog for that. However, this one I just couldn’t resist, but it is sadly still a concept.
If you are a regular reader of this blog, and I am told that we have many, then you know that I am nuts over all things augmented reality. This particular one can be used a famous movie locations.
You can watch the video to see it in action, and it looks simple to use. Find the spot where a movie was filmed, like the Westminster Bridge in 28 Days Later, and you will see the scene played out.
As you can see in the video, the locations are in the UK. I hope this App will eventually come with locations for the United States.
Personally, I love going to places were movies were shot. I visited the town of Preston, Idaho, just so I could see the final shot of Napoleon Dynamite. It would have been very cool to use an App like this there.
In fact, I can see this App being used for movie-related tours. Forks, Washington could be used for a Twilight-based tour, and I’m pretty sure that L.A. and New York City have plenty of places to use this App.