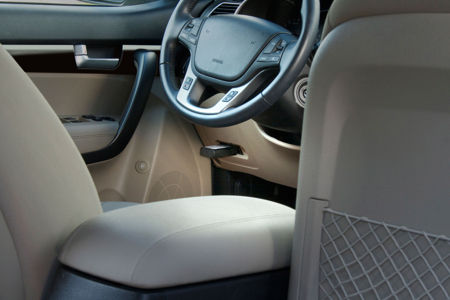 September 11 is a sombre day over here in the US, as we remember the atrocities that were done by terrorists close to one and a half decades ago. The world has pretty much bounced back since, and we are told that the man behind Al-Qaeda is dead, his body sleeping with the fishes somewhere in the sea. Still, the war on terror continues throughout various pockets in the world, and so too, does the war on slow speeds and intermittent connectivity. A portable Wi-Fi hotspot booster is not enough if you can carry it with you these days, how about plugging it into your vehicle? This is why AT&T has teamed up with ZTE to roll out the ZTE Mobley, which is the first plug-in vehicle Wi-Fi hotspot from AT&T.

The ZTE Mobley is flexible enough to let it have up to five devices to connect to the internet and to make use of the hotspot data plan in order to surf the Web, carry out video and voice calls, to enjoy some games as well as watch videos all on AT&T’s LTE network – which they claim it to be the most reliable in the country, but I will leave that to the carrier’s users to vouch for them.

It is a snap to install and set the ZTE Mobley up – all that one needs to do is to plug in the ZTE Mobley into your vehicle’s OBD II (on-board diagnostics) port. In other words, it should be able to play nice with most vehicles that are at the oldest, 1996. Once it is plugged in, there is no longer any more need for charging cables to keep the device juiced up, since your ride’s battery itself will automatically power the ZTE Mobley in order to create a Wi-Fi connection within seconds.

The ZTE Mobley is available for $0 with a two-year agreement, or if you do not want to be tied down to an annual commitment, it will have a $100 outlay. You can also opt for the device to be added to the Mobile Share Value plan for an additional access charge of $10 each month, or connected with DataConnect plan with monthly charges of $20 for 1GB or $30 for 3GB.