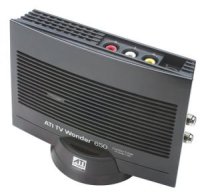 ATI has released a bunch of new TV tuners for those who have been thinking about including a computer in their living room as part of the entire home entertainment package, instead of the usual LCD TV, HD DVD/Blu-ray player, and high end audio center taking all the attention. The products in question are the ATI TV Wonder 650 Combo USB, TV wonder 600 PCI Express and the TV Wonder 600 PCI. All of these tuners will be able to bring HDTV goodness to the computer, so make sure your rig runs silently enough not to interfere with dialog in a movie due to the noisy hum of its cooling solution.

For those who are interested in the TV Wonder 650 Combo USB, it will boast a couple of TV tuners within, providing users with the benefit of watching one channel of over-the-air TV/HDTV while recording another simultaneously. If the functions sound pretty familiar to you, that’s because the PCI Express version was already launched back in July, and this targets those who are interested in a USB based solution. In addition, the TV Wonder 650 Combo can also record unencrypted digital TV (also known as ClearQAM). It will retail for $149 – a small price to pay considering the benefits you’ll be able to reap in the living room.

As for the ATI TV Wonder 600 and TV Wonder 600 PCI Express, both of them are but the same card save for the difference being in their respective PCI interfaces. Both will set you back a dollar short of a Benjamin, and boast similar ClearQAM recording as found on the more expensive ATI TV Wonder 650 Combo USB. These two tuners will be powered by Catalyst Media Center software, providing access to features such as place shifting to view TV programs in different environments. This software enables unrestricted programming to be converted with one click for use on most portable video players. As for the TV Wonder 650 Combo USB, it allows users to switch between digital and analog programs and record an analog program while watching digital programming or vice versa.