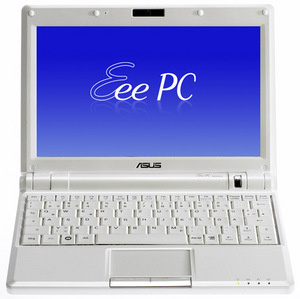 I own an Asus Eee PC 701 – one of the “original” models of the hyper-popular Eee PC released by Asustek this past fall and I absolutely love it. Sure, the screen could’ve been bigger – but I’ve been more than satisfied by this little dynamo. And, as we reported on Coolest Gadgets yesterday, the new Eee PC 900 is coming out soon with an 8.9-inch screen, more memory and a heck of a lot more storage than my 4G model. That’s great, right?

But today, a top executive of Asustek announced plans of a model of the Eee PC with a 10 inch screen! Here’s part of the story from PC World who broke the story:

“The feedback we’ve received from users has been great. Many have asked us for bigger screens and better usability. That’s what made us start developing the Eee PC 900,” said Jerry Shen, CEO of Asustek, during a news conference in Taipei. People are asking for bigger keypads and more software as well, issues the company continues to work on.

An Eee PC with a 10-inch screen could be out later this year, and it will be the biggest screen an Eee PC will ever get, Shen said. The company defines anything with a 12-inch screen or larger a classic notebook PC, not an Eee PC.

Asustek believes that screen size makes a difference in sales.

The new Eee PC 900 with the 8.9-inch screen will likely account for 50 percent of overall Eee PC shipments by June, and 60 percent or more of shipments sometime in the second half of the year, said Shen.

I can foresee other manufactures just scrambling to get out their own iterations of the Eee PC in order to snag a slice of this new computing market pie. We’ve already have seen dips in the market by other manufactures – but for now, it looks like Asustek has the edge in the sub-notebook market.