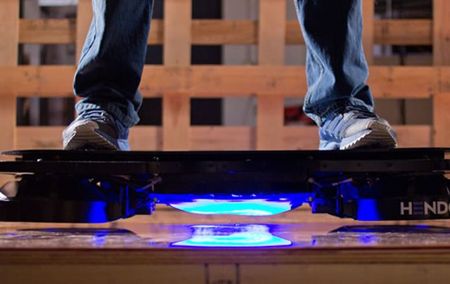 Remember Back to the Future II, where next week would see October 21st 2015 arrive, and many of the inventions thought up of back then are still not realized today. Flying cars being the norm, the hoverboard, well there has been flirtations with the idea from time to time, but nothing really concrete has happened to date. For sure, Lexus has come up with their very own hoverboard which will require a dedicated park to ride it on, and here we are with a potential competitor known as Arx Pax with the reveal of their next generation hoverboard.

Touted to be the first real hoverboard in the world, the next generation Hendo 2.0 will debut on – you’ve guessed it, October 21, 2015. Sporting a more true-to-skateboard-like design that was inspired by close collaboration between Tony Hawk and Arx Pax’s design team, it also saw the team make modifications to actual skateboard trucks as part of the structural control system.

The Hendo 2.0 will boast of a sleeker design, improved rider control and quieter hover engines in order to make everyone lust after it all the more. According to Jill Henderson, co-founder and Chief Communication Officer at Arx Pax, “We’re thrilled to be associated with BTTF’s imaginative technologies, especially since ours is now a reality. Our second-generation hover engines, which power Hendo 2.0, are stronger, more efficient, and open up new possibilities for the way we transport objects and people. We’ve all heard of wearables; it’s time to start thinking about moveables.”

Some of the key improvements found in the Hendo 2.0 Hoverboard include a skateboard-like deck for improved rider control with a familiar user interface, an improved power system with additional charging and power management features, USB connectivity and longer battery life, better traction using modified skateboard-style trucks integrated with the hover engines to provide more intuitive control, simplified engine controls for users to easily connect and disconnect, a wireless safety switch that allows the user to turn the hoverboard off remotely, a stronger hover engine performance from a more efficient design; and a sleeker profile and improved balance due to advanced engine design that employs a modular MFA array for enhanced performance.