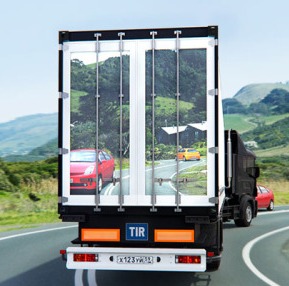 Some of you have at least heard of Art Lebedev, the creator of the Optimus Maximus, the keyboard with a screen on every key. Some of you thought that was impractical, and it was quite expensive.

Art Lebedev has now conceived another idea that will probably very expensive to implement, but very useful. It is called the Transparentius, and it is a Harry Potter spell to turn a truck invisible.

Seriously, it actually is a way to put two LCD screens on the back of a semi truck to show what is in front of it. Of course, there would have to be a camera in front of the truck to create this sub-standard invisibility trick.

I can see the inspiration for this Transparentius, because we have all been behind a big semi trucks before. They usually move so slow, that we have to pass, but those trucks are massive that we can’t see around them. With these screens on the back, now you see when it is safe to pass.

Of course, those screens have to be pretty expensive, and then there is the camera that it feeds to. It could be an easy target for truck-stop robbers.

Well, this is still a concept for now, so maybe Mr. Levedev can iron out all the kinks of this device soon. Perhaps LCD screens will be really cheap by then.