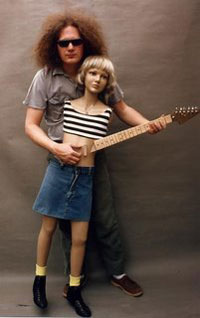 It never ceases to amaze me what men (and women, of course – I’m just talking in an extremely general manner, so please don’t get overtly PC on me) can do with a little bit of imagination, some D.I.Y. skills, and a passion to create something totally new that blows our collective minds away. Lou Reimuller obviously had more time on his hands than the rest of us by lovingly fusing an armless mannequin of yesteryear with a modern electronic guitar. He has dubbed her Teenar, and she has this sultry look that casts a pall of gloom whenever you look at her direction, but nobody is stopping you from stepping up, cradling your arms around her, and start pulling the right strings to bring a cheery disposition to the sombre mood all around.

Incidentally, Teenar shares the same body as the electric guitar itself, so while you’re busy playing with her, it looks as if you’re giving her the tickle of her lifetime. At least you can tell your friends and family that you spent a whole evening with this armless girl, entertaining her with your guitar skills that were picked up by playing Guitar Hero and its sequel on the PlayStation 2, without having her snub your advances.

Of course, you can always conveniently leave out the fact that Teenar is in fact, a mannequin, but they don’t really have to know that, do they? After all, you would probably have scored quite a number of brownie points with plenty of other chicks in the scene when they hear about your hanging out with a handicapped person. Hopefully they aren’t avid readers of Coolest Gadgets for your sake.