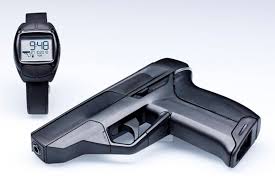 Okay, so we have smartphones that can be unlocked with a fingerprint scanner, keeping the contents safe from prying eyes and identity thieves. We have cars that open their doors to anyone simply holding the car keys, and homes that unlock themselves by looking into our eyes. While some of this technology is fairly new, it is becoming apparent that there’s a whole slew of new ways to lock stuff up, and now… a bunch of new things we can start locking.

Check out the Armatix Smart Gun,  seemingly the first of its kind, this .22-calibre, magazine-fed, semi-automatic handgun is designed and manufactured by the German company, Armatix. What makes this pistol unusual is that the Smart Gun can only be fired with an accompanying wristwatch. Yup, the watch is equipped with RFID, and when the shooter grips the handle it sends a signal to unlock the weapon, and turns the red light on the back of the pistol green, indicting the weapon is ready to fire.

Now I’m not going to weigh in on the pros and cons of owning a handgun, only to say that with the advancing technology of our time, there should be some things on the horizon that can modify guns in ways to make them safer… This particular “smart gun” has already hit the shelves here in the U.S.A, to mixed reviews, and an onslaught of arguments and legislation.

The Armatix iP1 weighs in at well under 19 ounces without it’s magazine, and it has an interface for additional applications, like a camera. The pistol sells for $1,399 and the watch retails for another $399 — Yes, they’re sold separately, still trying to figure that out. Availability is yet to be determined in most states. So are we safer now? For more information please visit armatix.us