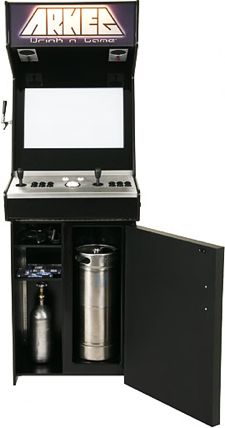 This has to be the world’s greatest gadget combination.  I know, in a cruel world like this one, it just seems too wonderful to be true, but it’s not, it’s actually real.  You can really play your beloved arcade games and have your beer right there with you.  Which makes this the ultimate frat house/bachelor pad gadget to have around.  No hang out will ever be complete without an arcade machine with a built-in keg.

The arcade cabinet comes with a total of 69 different games.  Those games include Mortal Kombat 1-3, Street Fighter, Asteroids, Battlezone, Major Havoc, Marble Madness, Defender and Centipede.  If that’s not good enough for you it’ll also play computer games and flash games on the internet.  As far as the actual electronics of the game go it has a 24-inch screen, a 2.1 sound system, two joysticks and a trackball.  To fill up a mug full of beer, you’ll just need to reach around to the side of the console to reach the chrome beverage faucet.  You can purchase the Arkeg for $3999.