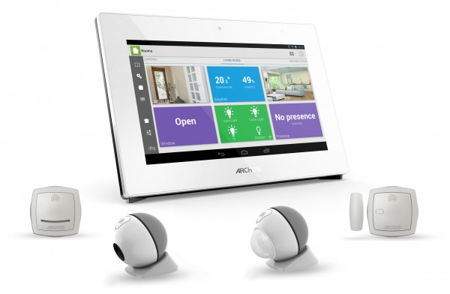 Archos, a company that deals mainly in portable media players many years ago, has since moved on with the times, having a decent number of tablets on offer for the masses like the Archos 80 Xenon tablet, as well as an Android-powered netbook like the Archos Arcbook. Well, this time around, it seems that Archos will be ditching both product niches, and concentrate instead of its highly-anticipated Smart Home that boasts of unique technology within to give Archos a chance at competing in the Connected Home market, helping transform users’ houses along the way.

Thanks to the Archos Smart Home, connectivity has taken a big leap into the future, since users are now able to define actions that will be based on specific triggers in order to meet their individual needs, resulting in the creation of as many possibilities as one is able to imagine. Take for instance, a program that snaps a photo whenever someone enters the room right after opening the door, before sending you a notification alongside the snapped photo on your smartphone. Thieves, beware!

For those who would want to turn their regular house to a Connected Home, the Archos Smart Home starter pack will comprise of one Archos Smart Home Tablet to manage the Connected Objects, a pair of Archos Mini Cams to snap photos, a couple of Archos Movement Tags to detect movement and door openings, and another two Archos Weather Tags which will help measure temperature and humidity.

Interested parties would have to be willing to part with $249.99 for the Archos Smart Home starter pack, while those who want to purchase stand-alone products will be able to do so from $24.99 onward. Expect other connected objects to arrive throughout the summer, including a smart plug to control power supply, a siren to serve as an alarm and a motion ball to detect movement.