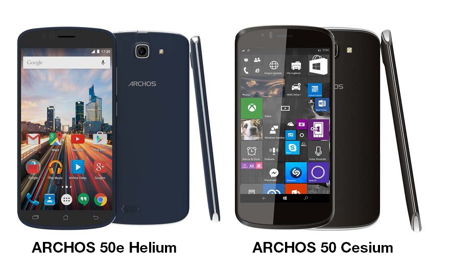 In many parts of the world at the moment, it is not the most economically vibrant of times. Not only are currencies depreciating in selected regions around the globe, there are also internal, domestic issues such as an ailing stock market or a property downturn that has set the tone for a negative financial outlook, and this has led to a heightened level of awareness for folks to tighten their belts – and to make sure that every single penny spent would be able to deliver maximum returns. Archos of France knows this, which is why they have rolled out not one, but a pair of 5″ smartphones that will come with hardware specifications to keep you happy, without breaking the bank.

The asking price for each of these smartphones? We are looking at a mere £99 each, now how about that? The first of the two would be the Archos 50 Cesium that will arrive with Windows 10 right out of the box, whereas those who would prefer to do their mobile work on the Android platform can always settle for the Archos 50e Helium, where it will be powered by Android 5.1 Lollipop. Sounds like the same kind of modus operandi when Archos rolled out the Helium Plus 50 and Helium Plus 55 handsets earlier this year.

The Archos 50 Cesium and 50e Helium smartphones are more or less similar when it comes to their list of hardware specifications, where common denominators between the two would include a 5” HD IPS display that renders bright, realistic colors and allows wide viewing angles. As for the chip that keeps everything running together, it would be 1.1Ghz quad-core processors from Qualcomm. There will also be 4G/LTE connectivity thrown into the mix, in addition to a sleek outer design with rounded edges and a metal frame.

So, between the two devices, which one would you settle for as a road warrior?