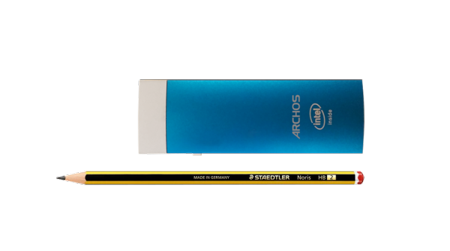 When the PDA was first released and it more or less became a device that road warriors had to have, everyone thought that it might even be a replacement for the notebook or laptop to a certain extent. After all, the higher end models, especially from Palm, did come with the ability to go online, to check and more importantly, reply emails, surf various websites, perform banking transactions, and to let you let off some steam with gaming support. However, it looked like the advent of the smartphone killed off the need for a dedicated PDA, and hopefully the stick PC idea would not die in a similar manner some time down the road, either. Lenovo did show off their Ideacentre 300 not too long ago, and now it looks like Archos of France has delivered their take in this niche market with the PC Stick.

Some might deem the Archos PC Stick to be the future of mobile computing, while I would not blame the others for sitting on the fence concerning the matter. Still, let us take a closer look at what the Archos PC Stick is all about. Basically, it claims to come with all of the power of a personal computer, except that the form factor is exceptionally tiny, that you will need to hook it up to a display through an HDMI port – be it a computer monitor or a TV. This compact HDMI-connected drive is so small, you can stash it into just about any pocket as you so desire.

Other than monitors or TV screens, the Archos PC Stick can also be plugged into any projectors. The moment it is plugged in, the PC Stick will automatically boot up in order to reveal a full computer with access to a slew of Windows mobile programs. Controlling and operating it is a snap – just connect keyboards, mice, and other accessories to the device via Bluetooth or an USB port, and it will play nice with all Windows, Android, and iOS keyboard applications and game controls for that added dash of flexibility.

Expect it to run on a pre-loaded copy of Windows 10, and you also have pre-installed productivity software to help you get started right out of the box such as Word Mobile, Excel Mobile, and PowerPoint Mobile. As for the hardware underneath the hood, they comprise of an Intel Quad-Core processor, an Intel HD Graphics chipset, 2GB RAM, 32GB of internal memory, and a microSD memory card slot, all of it going for $99 a pop.