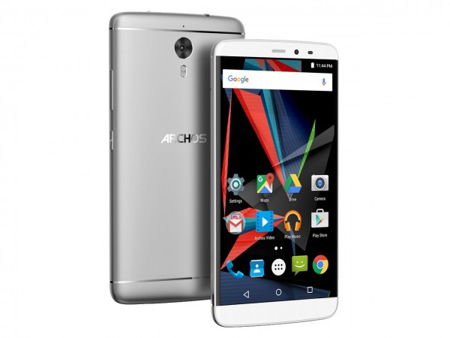 With so many different kinds of brands and models to choose from when it comes to the world of smartphones, phablets and tablets, which particular model should you gun for? There are many routes to take, depending on your preference, but even as there are many high end models around, do bear in mind that the main market would be the entry level as well as mid-range devices, and ARCHOS from France certainly knows this, which is why they have cleverly positioned their new smartphone known as the ARCHOS Diamond 2 Note, to deliver value for money as the handset itself takes a bow at the Mobile World Congress in Barcelona from February 22nd to February 25th, 2016.

One glance at the ARCHOS Diamond 2 Note might not be able to yield much information, but do bear in mind that this is no pushover at all. For instance, some of its rather lengthy list of robust features would include a 6” IPS borderless screen combined with a 2K resolution that will blow your eyes away, an optimized screen to body ratio as the 6’’ LCD is embedded into the form factor of a standard 5.5’ smartphone, 3GB of RAM and 32GB of internal storage that lets you stash your fair bit of information locally, a 4G octo-core Helio X10 CPU from MediaTek that ought to get the job done for most average users, and a 3600 mAh battery that should last the distance. Even then, the battery itself has fast charge capability that lets it hit 80% charge in a mere 45 minutes, now how about that?

As for snapping photos, the ARCHOS Diamond 2 Note will be no pushover, as it comes with a 16MP camera at the back with 4K video recording capability as well as an 8MP wide angle 84° BSI sensor F2.2 front-facing camera. Do expect stock Android 6.0 Marshmallow to run on the $269 ARCHOS Diamond 2 Note as it will be released to the masses only later this May.