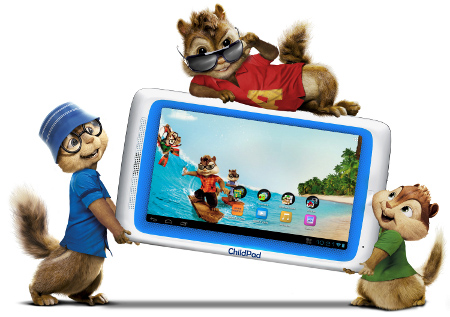 So your little one has been hankering after you for a new tablet, considering how you do your very best to prevent him or her from coming anywhere near your iPad each time you come home from work? You know the drill – as much as you want to let your kid enjoy some games on the iPad, you know that he is still trying to get his body’s co-ordination right, so walking or running around with the iPad in hand is not exactly the best idea, since a slip of the fingers or a fall would mean a crying child and the very high possibility of a broken display – not something you can afford right now, what with austerity measures being introduced just about everywhere else.
Apart from purchasing an old, first generation iPad from someone else, you might as well go all the way and deliver a tablet that has a specific target – the little ones. There is just something about Alvin and the Chipmunks being revived, where their past three movies actually combined to rake in more than $1 billion from box office receipts alone. I know, this is no Avengers, but it is still quite the achievement for a trio of high pitched chipmunks that would make for a decent meal for select jungle tribes out there. Enter the Archos Child Pad that has an Alvin and the Chipmunks 3 theme in place.

This unique Archos Child Pad will come in a compact and lightweight design, not to mention run on a 1GHz processor, accompanied by 1GB RAM while having Android 4.0 Ice Cream Sandwich as the operating system of choice. Pretty neat, since that would mean not having to loiter around and keeping your fingers crossed for an operating system update which might not even arrive in the end.
To make sure that your kids love it to the max, it will feature special Alvin and the Chipmunks 3 content like behind-the-scene clips, images from the movie, wallpapers, and even an online game. If they want something more feathery, there is always the pre-loaded Angry Birds game to keep them occupied, and as a parent, you will be pleased to know that this $129.99 tablet comes pre-loaded with a 6-month parental control application for child-safe web browsing. It boasts of a redesigned interface that features colored icons and folders to deliver direct access to games, apps and books, and has 4GB of internal memory to get you started.
Press Release