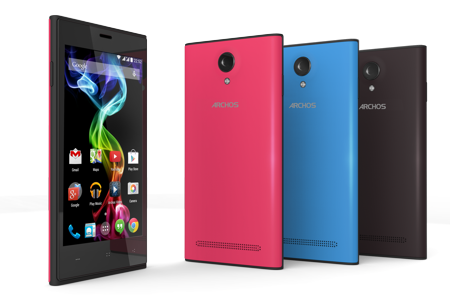 When it comes to the world of smartphones, there are simply a whole lot of models for one to pick from. After all, there are way too many manufacturers around with a slew of offerings, that the first time buyer might get overwhelmed from the number of choices. Archos is a name that one ought to be familiar with, although its presence in the smartphone world is not as pronounced as the likes of Samsung and Apple, and one of their latest smartphones happen to be the Archos 45c Platinum which might be a good starting point for those who want a highly affordable Android-powered mobile experience without breaking the bank.

The Archos 45c Platinum smartphone will feature vivid IPS screens that your eyes will definitely appreciate, boasting of an amazing array of colors at different viewing angles as well as having a trio of interchangeable back covers. Each purchase will come with a selection of deep black, metallic blue and spicy pink back covers that will complement the smartphone’s bright screen perfectly.

Underneath the hood of the Archos 45c Platinum, one will find MediaTek’s latest quad-core processor as well as dual SIM capability, as the latter allows you to separate your personal as well as work life. At the front comes a 2MP camera that does justice to selfies, while the back has a 5MP shooter with autofocus and LED flash, letting it capture video in Full HD without missing a beat. As for the operating system of choice, the Archos 45c Platinum will run on Android 4.4 KitKat, meaning you have one of the latest operating system versions without having to perform an update anytime soon – although Android 5.0 Lollipop has just been announced earlier this week, it will take some time before Lollipop filters down to the rest of existing smartphones.

Expect to pick up the Archos 45c Platinum smartphones for $99 a pop where available as an unlocked device.